A nest record of Spot-winged Thrush Zoothera spiloptera in Sri Lanka and some notes of its plumage with particular reference to its postocular bare skin patch.

Spot-winged Thrush Zoothera spiloptera is an endemic species recorded primarily in the wet zone forests and adjoining well wooded habitats of Sri Lanka. It occurs from the lowlands up to 2100 m. Localised populations also exist in the riverine forests of the dry zones (Grimmett et al. 2000, Clement and Hathway 2000, Rasmussen and Anderton 2005). It is rather shy except at dawn and dusk (Grimmett et al. 2000, Rasmussen and Anderton 2005), when it calls frequently from a low perch and often comes into the open on forest foot paths, etc (Grimmett et al. 2000). Much of its daytime is spent foraging on the ground in the forest interior and as a result it could easily be overlooked especially when it is not singing (Clement and Hathway 2000). Due to these habits photography of the species is quite challenging as it is often encountered when the lighting is not all that conducive. In this note I record a nest of Spot-winged Thrush in Sinharaja World Heritage Site Reserve (hereafter referred as Sinharaja), and offer a few notes on its plumage with particular reference to its undocumented postocular bare skin patch and speculate its possible function as a pseudo-bill to create an anti-predator “shadow face”. 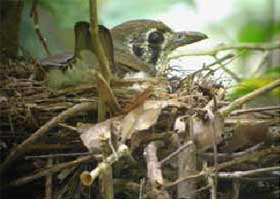 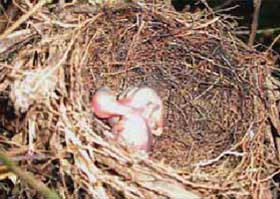 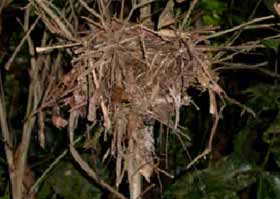 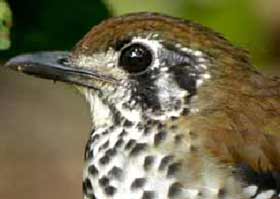 On the 29 September at around 14h30 while birding alone in Sinharaja, I observed a nest of Spot-winged Thrush in the forest interior. It was built 2 m from the ground in a Lijndenia capitellata tree (Family: Melastomaceae, local name: Pinibaru) in the forest understorey close to a stream. I was about 5 m from it when I first discovered it. I went back a few steps to observe it unobtrusively. I noticed both parent birds attending to the nest: bringing food and brooding. I obtained a few digiscoped pictures of this behaviour. When both parents vacated the nest to forage, I photographed the nest contents, which consisted of two hatchlings. As reported in the literature (Legge 1880, Henry 1998, Harrison 1999, Samaraweera 2004, Rasmussen and Anderton 2005), the nest was very well camouflaged and looked like an untidy aggregation of sticks & dead leaves, etc., from outside, but its interior was a neat cup lined with rootlets and tiny twigs. After a few minutes I vacated the place. I did not visit the nest site until October 2004 when I bserved one fledged juvenile Spot-winged Thrush, which looked very much like the adult. It was seen in association of two adult birds and I observed it being fed by one of them.

Notes on the plumage of Spot-winged Thrush

The following notes on the plumage are based on subsequent analysis of the photographs I took of the adult birds at the above nest (Plate 1, 6) and another individual photographed in a home garden close to the Kelani Valley Forest Reserve, in Kithulgala on 23 January 2005 at 11h40 (Plate 4-5). 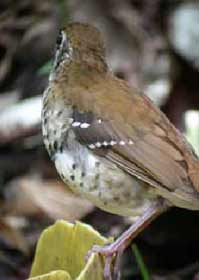 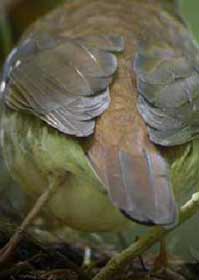 Forehead crown and nape olive brown. Bill black with indistinct pale gape. Tiny indistinct black hiskers around the base of bill. Lores whitish. Eye dark. Diffuse black malar stripe and whitish submustaial stripe. Chin and throat white. Broad vertical black stripe below the eye. Small black patch on top left of the eye, which combines with darker eye to give the bold vertical black stripe below it a longer appearance especially when viewed from a distance. Prominent white eye-crescent on the rear portion of the eye starting halfway above it and continuing down till it reaches the bold vertical black stripe below it, giving impression of a broken white eye-ring when viewed laterally. Ear coverts whitish. A very distinct triangular dark post-ocular bare skin patch (hereafter “postocular patch”), with a tiny black line above it and diffuse black stripe below it (forming the rear edge of the ear coverts). These later two features merging with it to create a black crescent-like appearance behind the eye when viewed from any distance. Tiny series of white spots around postocular patch and black stripe below it demarcating that area. The olive-brown upperparts shade into a thin diffuse olivaceous-grey line around the facial area. This begins as a thin line from billbase, going above the black and white borders of the upper eye and gradually becoming broader as it goes around the outer borders of the tiny white spots behind the eye and getting still broader on necksides down to flanks. A few tiny indistinct hair-like feathers (filoplumes) on nape.

Rasmussen and Anderton (2005) the breeding of Spot-winged Thrush mainly takes place in According to March to May and August to December in the north. Kanchana Weerakoon who carried out a single species study of Spot-winged Thrush in 2000, has observed breeding activity in September, October and November in Sinharaja and a nearby forest patch (pers.com). This information and my nest record from September indicates that the northern breeding season of August-December is also valid for Sinharaja in the south.

The post ocular patch has not been mentioned in the literature. K. Weerakoon noticed it in the mist netted birds and specimens lodged in the National Museum of Sri Lanka but could not assign a possible reason for it (pers.com). I inquired from various other sources about it but none seemed to be even aware of the presence of this feature in Spot-winged Thrush or the possible function of this feature in birds in general.

When seen from the rear (Plate 5) the post ocular patch creates the impression of a pseudo-bill, in the post ocular region. Its triangular shape and the small white surrounding dots help to highlight it clearly. Also in the rear view the white eye-crescent on the rear eye-ring helps the eye to stand out prominently. These two features combine to create an impression of an ‘eye and bill’ and therefore a “shadow-face” around the postocular region, which may function to fool an ambushing predator planning an attack from behind. Since ambush predators attack unsuspecting prey at close range, it may be that the sight of this shadow-face can confuse an ambushing predator for an instant, just long enough for the intended prey to make a getaway.

The colour of this pseudo-bill matches that of the actual bill closely. This is true for most other species which bear this postocular patch. The bird species in which the post ocular bare patch is pronounced are mostly terrestrial or semi-terrestrial. A further function of this patch may also to give the bearer a wider area of view on the sides of the head in addition to enabling the eye to gather more light in poorly lit conditions. Thus the postocular patch may confer several important survival advantages.

Prof. Sarath W. Kotagama for commenting on the manuscript. I would also like to I would like to thank thank for Kanchana Weerakoon for sharing her knowledge about Spot-winged Thrush.

The above article was originally published in BirdingAsia 4 December 2005, the new-look Bulletin of Oriental Bird Club.