Amila Salgado got hooked on birds at the age of thirteen in 1989 after a school project in St Peter’s College, Colombo and made his first trip to Sinharaja the following year. Soon, he joined YZA, a local nature club, which was the beginning of the road to turn him into an all-round naturalist. Amila is a certified ‘national-guide’ under Sri Lanka Tourist Board and can guide in all tourist sites in Sri Lanka including the cultural triangle. 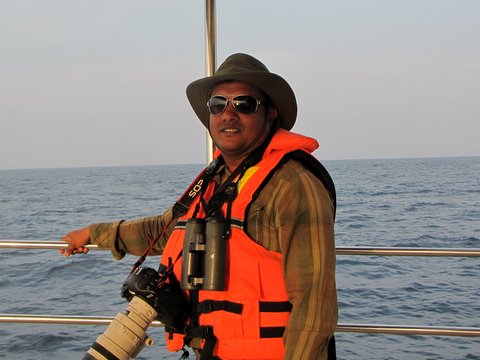 He is very quick in scoping even forest birds that wait long enough. This is a great advantage for bird watchers who aren’t into photography. To indicate the sightings in the field Amila also carries a pointer. Before turning a full time naturalist guide, he was a Manager of a Wildlife tour company. Having guided birders and photographers since 2004, he is well versed in all logistical nitty-gritty and site knowledge.

Amila holds memberships in several local as well as overseas bird clubs and has contributed articles to their ornithological publications such as BirdingAsia and peer reviewed Forktail—The Journal of Asian Ornithology. He has been co-author of popular article in the esteemed Natural History Magazine done by the American Museum of Natural History. A skilled nature photographer, Amila has contributed photographs to many ornithological publications some of which include The Cuckoos of the World Helm Idenitifcation Guides, Hornbills of the World A Photographic Guide by Pilai Poonswad et.al., and Dragonfly Fauna of Sri Lanka by Matjaz Bedjanic et.al., and Taprobanica—The Journal of Asian Biodiversity. Amila has recorded one first record, one second record and one third record of vagrant bird species to Sri Lanka, all of which were accepted by the rarities committees of the local Ornithological bodies.